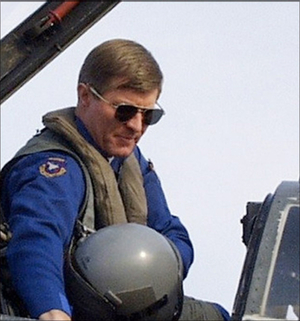 I think our technical difficulties are behind us and I do believe that we are ready to take off again this Saturday with our good friend Bill Scott. Bill has been involved with aviation for a very long time, and he has the stories and the life experiences that most of us just dream about.

Here’s a little bit of his bio: Bill is a coauthor of Space Wars: The First Six Hours of World War III and the sequel Counterspace: The Next Hours of World War III. He also co-authored a nonfiction book, Inside the Stealth Bomber: The B-2 Story, with Col. Rick Couch, a test pilot, who headed the B-2 test program. Black Aura, a novel about flying highly classified aircraft at the Top Secret Groom Lake, Nevada, base, is currently in work.

Make sure you check out his books either on his site or via the Amazon link in the column to the left.

And just a word about those nasty dastardly technical gnats … it’s amazing how many things can go wrong with audio equipment. I think it’s because everything is invisible, so you can’t see something starting to fray or tilt. You can’t even smell for mold or decay … you just have to take things on faith, almost.

I tip my invisible hat to anyone who has ever done a podcast or a radio show and who still has a shred of sanity. Tonight’s show will be a sort of patched-together thing without all the proper bells and whistles because as you can imagine, the bells won’t scan and the whistles are turning the LED lights red and you know what that means.

Also, if all goes according to plan, I will turn off my phone ringer, so there’s no need to call and let me know. I also plan to refrain from interrupting the menfolks as they talk about manly things … unless and if something starts to leak or hiss or otherwise boil over. I will be the proper mouse and sit quietly in the corner, knitting. That’s the plan.

Tune in at 6 PM Eastern and be prepared to lock and lol.

The Show: We’re back with Bill Scott, coauthor of Space Wars and Counterspace. Amazing to say, we’ve managed to clean up quite a few nits and bugs. A little bit remains on this podcast, but the info here is too good to miss. Prepare to adjust your sound volume up and down a few times.

Sounds great no echo music is louder then voices

You can get live feedback here I have about 8 people listening and chatting here http://ufology.chatango.com/

Its streaming under Future Theater on shoutcast radio I am streaming it on my site too.

The sound on my computer is up all the way, but I can only hear Bill. I can’t hear the guest or Nancy. I’ll sign off, and catch the show on Archive and see if I can hear everybody then.

I was out with the UFO group and missed this week, but hope you didn’t sit there quietly doing knitting. I will listen when it is uploaded.

I’ve really enjoyed the first two episodes. Looking forward to the more recent ones being uploaded to the Archive.

I am happy to say that the archive for show #4 is up, over there in the right-hand column. Enjoy all good convo that Bill Scott brings to the invisible table.

Sorry guys, impossible to hear the Archive too, and I have the sound all the way up on my computer. I don’t know what the problem is. I do wish you much success with Future Theater!

Hi Tom! First of all, thanks for trying! On my machine, I have to turn the sound way down for the Bill Scott and music parts, but that’s after the show gets going. At first, Bill’s voice is rather soft, but I can still hear it.

I’m not yet adept enough to manipulate the sound files, but meanwhile, maybe we have a Mac/PC incompatibility. Not sure. I guess we’ll have to stick to being ebook buds for now!

Hi Nancy, I’ll give it another shot later on. Maybe the sound will go up after a bit. I didn’t leave it on long enough I guess. I’m anxious to listen to the shows, believe me.

I’m rather new to ufology and only recently found your radio program through a mention on Jamie Havican’s Florida UFO Radio. Between following the two shows, I’m a very happy listener these days. Bob Tarmac.

Hey Bob! Welcome to the wonderful but wacky world of What? was That? Tonight’s show with Frank and Al will give you a lot to think about, that’s for sure. You won’t be the same afterwards.