Scotty Roberts has many interesting things going on in his official resume: Having spent the bulk of the last twenty-five years in advertising as a creative director, designer, and illustrator, Scotty’s background is laced with varied and diverse skills and experience in the publishing, audio, and visual fields. He possesses an astute flare for the visually dramatic, and carries that over from print to film.

After two years in a Christian bible college, he entered seminary pursuing his Masters in Divinity (Mdiv) and worked as a youth director. During his college and seminary studies, he focused on his academic and personal passion for history, theater, and art. His religious studies intensified his interest in spirituality, and his research of the paranormal expanded throughout the following years.

Shortly after his seminary years, Scotty began a small comic book publishing effort, writing and illustrationg stories, which were also pitched as animated television series. He developed and published the highly successful Ancient Heroes trading card series, and began development on a series of young readers chapter books. He authored and illustrated his first historical teen readers novel, The Rollicking Adventures of Tam O’Hare, which garnered success in the teen and college markets.

Tune in for some fun! 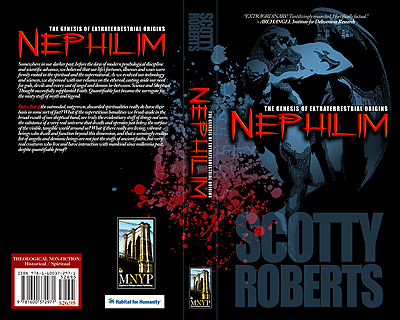 The Show: Join us for a lively discussion about publishing, including an introduction to Intrepid Magazine, Scotty Robert’s new venture in print. Plus, we talk about his work in progress, The Rise and Fall of the Nephilim, to be published by New Page Books. Here is a preview article!

Both Scotty and Bill have a deep and wide knowledge of the Bible, medieval underpinnings, and many interconnecting threads to both. It’s a tapestry of fun! 🚀